Yesterday, the final day of 2011, I had a bad run. It was the first time I’ve been to Central Park for a workout since my Himalayan Adventure, and I had high hopes that I would enjoy a relaxed 6-mile loop. Sadly, my hopes were dashed.

I’m still battling the remnants of the pneumonia that I picked up in Nepal. And I shouldn’t have set the bar so high for myself yesterday, but that’s what I do. I met up with a couple of friends, and we started out at an easy pace. We caught up on life and chatted about our New Year’s Eve plans. Then I stopped talking, the effort was becoming too much. We tucked into Harlem hill, and my chest tightened up. I couldn’t breathe. I slowed to a walk, and I wanted to cry. This hill that I used to hate, but over the years had come to love, was suddenly back on my bad list.

At the crest I began to jog again, but the damage had already been done. I was mentally shot. I took another walk break on the next incline, and then cut off onto a dirt path to head back across the park where I started. In total, I completed about 3.5 miles. I should have been congratulating myself for getting that far, but instead I was frustrated. Mad at my lungs for being weak, angry that I’m still not better after three weeks of rest, annoyed that I got sick in the first place.

This morning as I welcomed in 2012, I realized I’m being way too hard on myself—I’m expecting too much, too soon. I’d like to say that I’ve resolved to lower the bar, to be more compassionate with myself (mentally and physically), and to stop feeling frustrated when things don’t go the way I imagine. But I haven’t. Instead, I’m looking into new training plans, new shoes, and destination races, and coming up with goals that are above and beyond the ones I set for myself last year.

I’m clearly not paying attention to the lesson I should have picked up from yesterday’s disappointment. Instead, what I have learned is that I’d rather shoot for the stars than aim too low. If I don’t even reach the moon, yeah, I’ll be bummed. But the kernel of positivity in my heart reminds me that the day I get it will be incredible.

Happy New Year!!! Have you made any resolutions yet?

I’m a week into my trek on the Annapurna Circuit and my legs and spirit are still holding up. I was a bit worried that after climbing to Everest Base Camp I’d be sick of gorgeous mountain views and not being able to wash my hair (so sexy!). But this region of Nepal has been keeping me entertained and I’m getting used to the basic accommodations. (Though I must admit, I’ve been having dreams about sudsing up with Head & Shoulders shampoo.)

Today I’m in Manang, a village in the Manang district that measures in at 3600 meters. Low enough to breathe comfortably, but high enough to get winded walking up a steep hill. About 500 families in this village consider the peaks of Annapurna II, Annapurna III, Gangapurna, and Chulu East to be their neighbors.

Days are warm(ish) here–I’m hiking in pants, a t-shirt, and a light sweatshirt, but the temperature drops dramatically at night. I sleep in thermal long underwear and keep the case for my contact lenses snuggled in my down sleeping bag with me. (Waking up to frozen contacts is not fun.) Still, I’m thankful for this experience.

Speaking of being thankful… I’ll be missing out on my favorite holiday this week. Have a slice of pumpkin pie for me!

Photo Update: I still haven’t been able to upload pictures, and it looks like I won’t be able to until I’m back in Kathmandu (fingers crossed) or NYC. I promise, they’re worth the wait!

T-1.5 hours until I leave for the airport. I’m packed. I’m full of sushi (probably won’t see that for the next 6 weeks!). And I’m killing time watching this film trailer. Hello, motivation!

I’ll be wearing my trail running shoes on the plane tonight, which means they’ll be on my feet when I arrive in Nepal on Friday morning. (Yep, it takes a day and a half to get there.)… After watching Sam Fox try to break the speed record for running the Pacific Crest Trail to raise awareness and money for The Michael J. Fox Foundation for Parkinson’s Research (in honor of his mother who suffers from the disease), I’m temtped to run portions of the trail on my Himalayan trek. I’ll let you know how that goes.

In the meantime, you can go out and do great things on your run today! “You don’t have to be given an opportunity, you just have to believe you’re capable of something, and then go after it and give it a try,” says Fox. Find out more about his journey at runwhileyoucanfilm.com.

What inspires you to run?

I’ve been hunting and gathering all the necessary items to pack for my Himalayan Adventure for the past few weeks. And I’ve learned a very valuable piece of information. After reading reviews, talking to pros, and finally purchasing a technical piece of equipment—say, a water purification system—stop researching. I made the mistake of continuing to peruse websites only to decide the one I bought is sub-par. (I’m sure it would have been fine. But I’ve convinced myself otherwise.) So earlier today I scrambled to get to an outdoor store to buy a different one. This all-in-one, squeeze-it-till-your-hands-cramp Katadyn MyBottle Purifier will be joining me as I trek to Mt. Everest and the Annapurna Circuit. It’s compact, comes in a pretty blue hue, and makes safe drinking water. Done.

Now the feat of fitting everything into one large backpack is upon me. There’s a 22-pound weight limit on my luggage (set by Intrepid Travel, not me), which has forced me to get creative with my wardrobe. I’m bringing two pairs of neutral pants and six brightly colored tops that can be mixed, matched, and layered. Believe it or not, I can make 30 outfits with those pieces. (My time spent working at a fashion magazine has paid off!)

I’m a little less organized in the toiletries department. All those tiny travel size bottles add up! But knowing I’ve got my hydration and clothing needs covered gives me a little bit of breathing room. No sense is sweating the small stuff, right?

Do you second guess what you’ve packed, too? Have you ever relied on a weight limit to keep your baggage to a minimum? 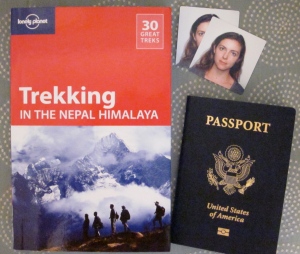 I’m not going all the way to the top—my nose is too cute to risk losing to frostbite, but I will be embarking on a 37-day trek to Everest Base Camp and the Annapurna Circuit in one month (from yesterday). I have a lot to do between now and then: Organize my gear, break in some hiking boots (I’ve already gotten some funny looks while walking the dog in them), buy a headlamp, figure out if I need a new waterproof jacket, read a guide book or two… I’m excited! And I’m looking forward to sharing my adventure here with you, blogging as often as I can from the trails.

In the meantime, Grete’s Great Gallop half marathon is this weekend. Even though I’m no longer using this race as a marathon tune-up, I’m planning to run strong. I fell off the workout wagon last week because of a chest cold, but I’m feeling better now and I think I can still aim to do well—and hopefully PR—this Saturday.

Are you running a fall marathon? Have you ever been to the Himalaya?

(Fun fact: There is no such thing as Himalayas. The correct term is Himalaya, which means “the abode of snow.”)